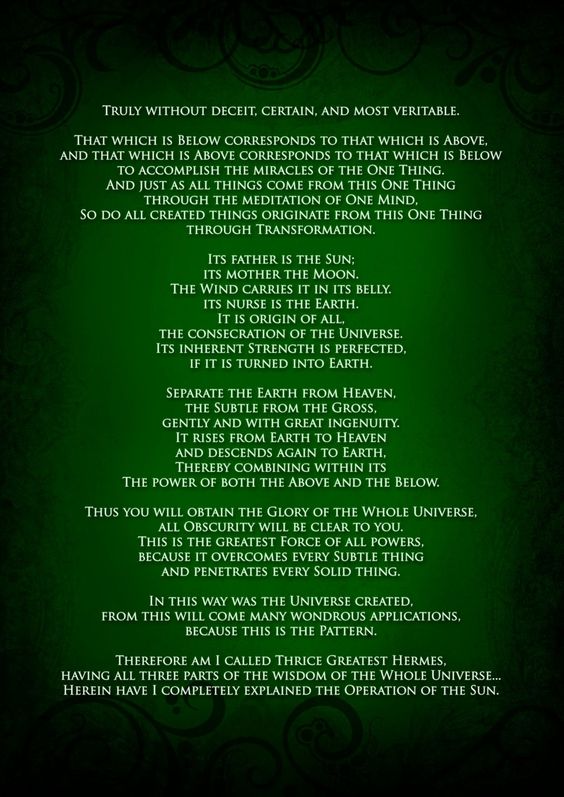 The Emerald Tablet of Hermes Trismegistus –

(Mystery of the Ether, Operation of the Sun & Gnosis of All)  The Emerald Tablet of Hermes Trismegistus –  –– Full text, Translations and Resource Page! This ancient text is an old alchemical work surviving from the ancient mystery schools. The mysterious Emerald Tablet is almost a ‘Gospel’ for Hermeticism for lack of better words, and is loaded with Gnosis & pure Esoteric Wisdom.. Check out my Video “Emerald Tablet of Hermes Explained” for a deep esoteric breakdown of sybolism and more!  [ … Enjoy yet another Sacred Texts Ultimate Resource Page :]

The Sun is its father, the moon its mother, the wind hath carried it in its belly, the earth is its nurse.

The father of all perfection in the whole world is here.

Its force or power is entire if it be converted into earth.

Separate thou the earth from the fire, the subtle from the gross sweetly with great industry.

It ascends from the earth to the heaven & again it descends to the earth ……..

4. The Sun is its father, the moon its mother, the wind hath carried it in its belly, the earth is its nurse.

5. The father of all perfection in the whole world is here.

6. Its force or power is entire if it be converted into earth.

7. Separate thou the earth from the fire, the subtle from the gross sweetly with great industry.

8. It ascends from the earth to the heaven & again it descends to the earth & receives the force of things superior & inferior.

9. By this means you shall have the glory of the whole world

10. & thereby all obscurity shall fly from you.

11. Its force is above all force. For it vanquishes every subtle thing & penetrates every solid thing.

13. From this are & do come admirable adaptations whereof the means (or process) is here in this. Hence I am called Hermes Trismegist, having the three parts of the philosophy of the whole world.

14. That which I have said of the operation of the Sun is accomplished & ended.

I am a sceptic by nature but I have no alternative than to offer subjective support to the claim that the Emerald Tablet has transformative properties.

Over the last two decades I have witnessed my personal notions and interpretations transmute, transform and develop, as I myself have matured. However, I temper this with the thought that if I had set out to learn chess,  after 20 years I would read infinitely deeper into the game than when I was first presented with the puzzle.

Exactly how words and sentences affect human psychological process has been written by wiser, and way better marketeers than I, and I fear such a course of enquiry will only distract us from the flow of this article. I must leave it to you, the reader, to decided whether to bite this forbidden fruit or to leave it alone.  Lets now return to the story and look closer at two particular sentences in Newton’s translation of the Emerald Tablet:

LINE 10: “Its force is above all force. For it vanquishes every subtle thing and penetrates every solid thing.”

Pop culture tells us that Newton conceived the concept of gravity after an apple fell on his head. Last weeks article re-interpreted this story as a metaphor similar to Eve in the garden of Eden. Both Newton and Eve ate forbidden fruits from the tree of knowledge and gained forbidden esoteric knowledge. But two decades before he conceived gravity, he had spent many months carefully analysing and translating these fourteen magically imbued sentences.

Read the 10th line again, but this time think about the word gravity as you read. Do you see how clearly and simply every word describes and defines a concept, which evolved in Newton’s mind, and after several decades of development he named this force – gravity? In addition to this observation Newton’s translation of the 12th line is no less revealing:

LINE 12: “Hence I am called Hermes Trismegist, having the three parts of the philosophy of the whole world.”

Having translated this sentence, and being convinced of the primal universal knowledge imbued within it, it becomes less of a mystery that later in his life Newton would find a three part solution to quantify the mechanical nature of the entire universe with his three Laws of Motion.

NEWTON’S UNIVERSAL LAWS WERE DIRECTLY INSPIRED BY THE EMERALD TABLET

Based upon this subjective evidence, I feel safe to speculate that Newton sensed the answers to the grand universal puzzle might be found in the Emerald Tablet. My working hypothesis finds support in a singular letter which Isaac Newton wrote to fellow alchemist Robert-Boyle urging him to keep “high silence” in publicly discussing the principles of alchemy:

“There are other things besides the transmutation of metals which none but they understand.”

Newton seems to have been convinced that within the folds of alchemy, and the Emerald tablet in particular, the answers might be found to the big outstanding questions at that time. He answered all the big questions in science after translating the Emerald Tablet and transmuting his alchemical ideas into fixed physical Laws, by which we now navigate time and space. Further supporting my assertion a Newton drew inspiration for his scientific laws from the Emerald Tablets, B.J.T. Dobbs said in his best selling book The Foundations of Newton’s Alchemy (Cambridge University Press, 1984):

“Don’t get set into one form, adapt it and build your own, and let it grow, be like water.”