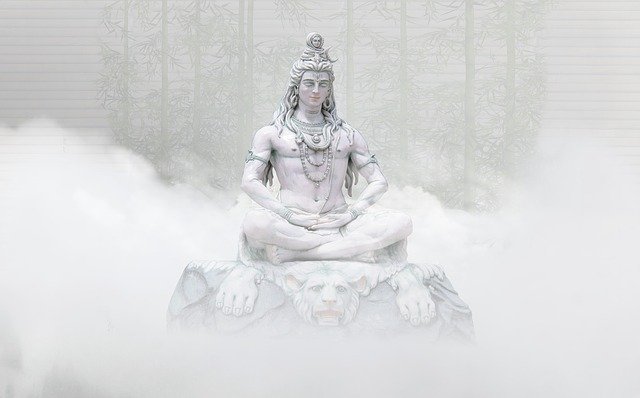 In the Hindu religion, Lord Shiva is known as the god of destruction. He is also said to be a symbol of mercy. .. Shiva Pooja involves recitation of Shiva Mantras. These mantras are recited to win over fear and fight one’s battles and come up undefeated. These mantras protect us from diseases, fears, etc. Proper and regular recitation of these mantras ensures that person gets success and siddhis. These mantras make people strong from the inside to fight any battles that they pick. They help cleanse the body from any sort of negativity and make one all the more powerful and strong.

In my mind, shiva is much deeper and dynamic in symbolism than most realize… Some about Shiva –

No one knows the start and end of Shiva and so, He is reverred by Lord Brahma and Vishnu as Mahadev ( Devon ke Dev, Lord of the Lords ).

That is why Shiva says “ I’m the start and end of this Universe”.

This means , there was nothing before Shiva and nothing would exist after Shiva, since Shiva was there before anything existed and would be there even after everything is destroyed.

Whenever Shiva is referred as the Destroyer, it means that He destroys the arrogance / desires / lust / evil and us, and thus dissolves us in Him.

Shiva is considered as the destroyer since He performs the dissolution task of dissolving everything and everyone into Him, by doing the Cosmic dance in…

Following are the six Lord Shiva Mantras that are extremely powerful..

The most well known and basic Shiva Mantra which simply translates to ‘I bow to Lord Shiva’. It is dedicated to Lord Shiva and if chanted 108 times every day, this mantra will help you purify your body and Lord Shiva will shower his blessings on you.

This mantra will make sure all your wishes get fulfilled along with the blessings of Lord Shiva.

It is a form of the most powerful mantra in Hinduism, the Gayatri Mantra. Shiva Gayatri Mantra is extremely powerful, it gives you peace of mind and that pleases Lord Shiva.

This is a very powerful mantra that helps you ask for forgiveness from Lord Shiva for any sin that you may have done along the course of your life.

This extremely powerful mantra helps us escape the fear of death. Lord Shiva is known as the Lord of death and destruction, hence only he can save us from death. Family members of people dangling between life and death often recite this particular mantra for the affected to get well soon.

Ekadasha Rudra mantra is a set of eleven different mantras. During Maha Shivaratri or Maha Rudra Yagnya, all of the eleven mantras if recited are very beneficial for people. These eleven mantras each correspond to one month and it is said that if you recite the one specified for your month, it turns out to be most beneficial, but reciting all eleven won’t do any harm as well.

From Source 6 mantras of lord Shiva