The Book of Thoth: A sacred ancient Egyptian book that offers unlimited knowledge

One of the most mysterious books to have ever been mentioned in the history of mankind is the Book of Thoth—a sacred and mysterious book of the ancient Egyptians, written by an ancient God.

They include numerous texts that were claimed to exist by ancient authors and a magical book that appears in an Egyptian work of fiction.

The Book of Thoth appears fragmented in diverse papyri, the majority pertaining to the second century of the Ptolemaic period.

The Book of Thoth is cited for the first time in the so-called Turis papyrus, published in Paris at the end of the eighteenth century, which describes a failed attempt to kill a pharaoh, using a series of spells taken from the Book of Thoth. 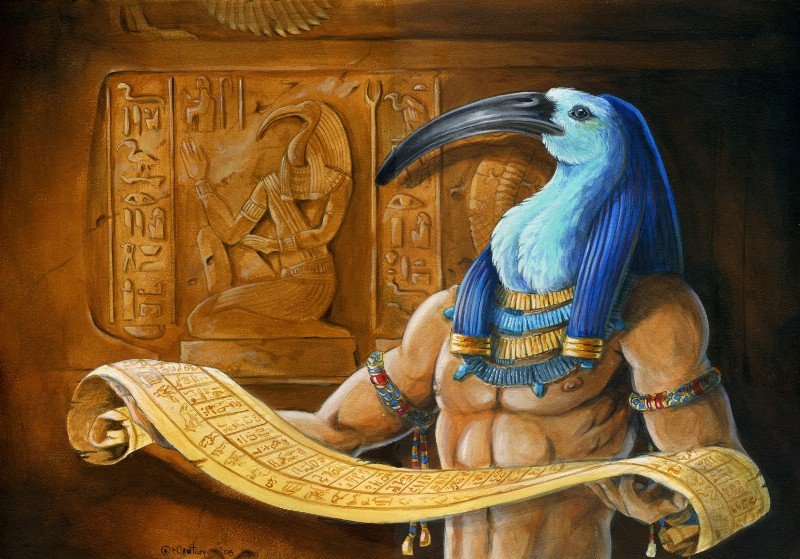 He Who Balances by Hbruton

*Note: Philip Coppens writes how the “Turis Papyrus, it does not exist but was probably derived from the well-known Turin Papyrus. The Turin Papyrus of Kings, also known as the Turin Canon, is a hieratic manuscript of the 19th dynasty of Egypt, listing the kings of Egypt from the earliest times to the reign of Ramses II (1279–13 BC), under whom it was written. Thus, not only does the Turis resemble the Turin in name, but also in date of origin.”

In addition, there are different versions, although the compilations have led to reconstruct a history common to all of them, basically a dialogue in which there are two interlocutors, the god Thot and a disciple who “aspires to know”, although there is another god, probably Osiris, who also speaks with the disciple.

The literary framework could be compared with the Greek hermetic texts, which also show dialogues between Hermes-Thot and his disciples; however, the presence of some texts prior to the first-century place it ahead of the first Greek hermetic philosophical texts.

The name of ‘Book of Thot’ has been applied to numerous texts.

Manetho—an ancient Egyptian priest—claimed that Thot had written 36.525 books, although some investigators like Seleukos affirm that they were around 20,000.

The fictional Book of Thoth

Legend suggests that the book was originally hidden at the bottom of the Nile near Coptos, where it was locked inside a series of boxes guarded by serpents no man could kill.

The brave ancient Egyptian prince Neferkaptah decided to recover it. He fought the serpents and succeeded retrieving it, but in punishment for his theft from Thoth, the gods killed his wife Ahwere and son Merib.

Neferkaptah eventually committed suicide and was said to have been entombed along with the book.

Setne eventually meets a beautiful woman who seduces him into killing his children and humiliating himself in front of the pharaoh.

He discovers that what he had seen was in fact an illusion put forth by Neferkaptah, and in fear of further retribution, Setne decides to return the book to Neferkaptah’s tomb.

The story is meant to reflect the ancient Egyptian belief that the gods’ knowledge is not meant for ordinary humans to possess.

Fragments have been found in Berlin, Paris, Vienna, Florence, Copenhagen and New Haven.

It was believed that he who read the contents of the book would obtain the means to decipher and master secrets related to the earth, the sea, the air and the celestial bodies.

It also conferred the faculty of assimilating the language of animals, giving life back to the dead and acting on distant and nearby minds.

The church father Clement of Alexandria, in the sixth book of his work Stromata, mentions forty-two books used by ancient Egyptian priests that he says contain “the whole philosophy of the Egyptians”.

All these books, according to Clement, were written by Hermes (an ancient pre-existing Greek god that the Greeks likened to Thoth, claiming they were one and the same god, due to the fact they had similar qualities, i.e. both invented writing).

The Ancient Egyptian Book of Thoth: A Demotic Discourse on Knowledge and Pendant to the Classical Hermetica

THE BOOK OF THOTH

FRAGMENTS OF THE BOOK OF THOTH

“Truth lies at the bottom of a well.”